This year, on the fifth of the month of Iyar, 5780, the year of Corona, Israel is celebrating 72 years of independence and freedom.

Our celebrations will be muted, of course, as public ceremonies have either been cancelled or moved to zoom; national parks are shut down; and even gatherings of family and friends have been banned. There won’t be any fireworks, no mass barbecues on street corners, no traffic jams; no public celebrations of any kind.

But we will still be celebrating. An itsy-bitsy lethal world-ending virus will not stop Israelis from celebrating the miracle that is Israel.

My family has spent many a Yom HaAzmaut eve at City Hall, where the celebrations traditionally begin. Thousands upon thousands gather in the main square to hear young kids play offkey in school bands, get sprayed with silly string, and pay exorbitant prices for gewgaws such as glow-in-the-dark wrist bands, blinking necklaces that play hava nagila, head bands with googly eyes, and large blow-up hammers that squeak. All, of course, are adorned with a blue Magen David, so that one feels wonderfully patriotic paying a month’s salary for a toy that the kid will probably drop and lose in about 10 minutes. But hey. 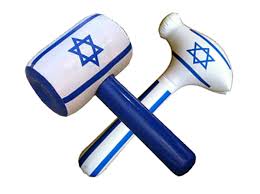 In addition to its home-grown talent, each city brings in an Israeli ‘superstar’ – some of whom are more super than star – to perform for the masses. While the show is free, these performers receive tens of thousands of shekels per performance and many of them perform in numerous locales. This is possible because Israel is such a small country. It’s also possible because these performers travel by helicopter, parachute down onto the stage (“When I served in the army, I was stam a jobnik”, said no Israeli ever), perform in each place for about 12 minutes, then hightail it off to the next venue.

At 10 PM precisely, the main event begins; Fireworks. To be honest, the show is usually highly impressive; colourful, showy, flashy, and very loud. And it scares the bejabbers out of most dogs.

This year, the superstars, like the rest of us, will be staying home and out of helicopters. There won’t be any fireworks, and the gewgaw sellers are selling online only (with free delivery!) Hopefully, the saved tax money will go to supplying meals to our (in lockdown) elderly .

Israelis do love a good show, and one of the favorite parts of the day is the annual Israel Air Force flyover. Various planes of the IAF fly in formation over the country during the morning hours. The times the flyover will appear in any one community is publicized and people come out of their houses (where they are watching the International Bible Contest and nodding wisely – this year’s contest is being held remotely) and watch the planes in the sky. Fingers point up and people say things like: “There!! That’s the F16.” “No, it’s not, it’s an F15. It has radar-evading capabilities, and an invisibility cloak.” “But that one is an M16. And over there is the Enterprise and BMX. You can tell because it’s smaller.”

This year, there won’t be a national flyover – the IAF supports the government in its attempts to minimize social gatherings (and probably sick of people thinking they are flying bikes) – and instead will have much smaller shows taking place in the air over hospitals.

In any case, the IAF was not established for flyovers. It was established to protect its grandmothers.

Both activities have their pros and cons. Meeting in the park allows one to meet with more friends and family; in fact, if you choose the right park you feel like you are actually celebrating with half the population. This is after you’ve met the other half of the population on the roads traveling to your destination. It’s entirely legitimate to borrow salt, canned corn, extra charcoal, or a blow-up hammer from complete strangers, because, we are, after all, one family.

The parks are all closed this year, but not empty!! They have reverted back to their original owners.

Even in normal years, when we are allowed to travel, not everyone leaves the city. Many people will find any shady area or patch of grass for a picnic; under the slide in the local playground, or the strip of grass in the middle of a four-lane highway.

In our neighbourhood, down the street from us, there are a couple of acres of planted trees. The area is colloquially known as ‘the forest’ and is often used by youth groups – especially during the Passover vacation – for sport activities, cookouts, or kumsitzes. By the end of the Passover vacation, the forest is usually littered with broken bottles, empty bamba bags, torn signs welcoming the scouts of the Bet Neighborhood! and other paraphernalia of teen-age kids (I won’t go into detail here).

On Yom HaAzmaut, those wanting a green area, but not wanting to venture too far from home, will meander over to the forest and set up shop there. Sweeping aside the teen debris, there would be two dozen different barbecues going on, and about 400 different electronic devices playing 600 different songs, all of which sound the same.

This year, half of Passover was spent under lockdown, and the other half under house arrest. The forest remained empty. After a winter of above average rainfall, it seems to be doing fine.

For the last several years, my family has not fought the traffic jams looking for a small spot of green. We’ve stayed home, in our yard, and invited friends and family to join us. We’ve often started out inviting eight people and ended up having 35 people in our yard eating marshmallows.

This year, it went the other way. I invited people early – shortly after Chanuka, in fact. I expected at least 25 people to come over and party hardy.

Instead, we’ll be four people. We’ll still decorate the garden with flags and lights. We’ll listen and dance to horrible music. We’ll drink beer and eat marshmallows. We’ll watch the smoke from our barbecue, where we will burn steaks and chicken wings, mingle with the smoke from all the barbecues from all the other yards up and down the street, where everyone is celebrating, alone – yet all together.

Everyone might not be eating marshmallows and burnt chicken wings. Some get challahs.

Despite the financial losses and the economic depression that is sure to follow; despite our unstable government (or complete lack thereof); despite the postponed weddings and parties and celebrations of all kinds; despite our deep grief at the tremendous loss of life all around us, we Israelis have so much to be proud of, so much to be grateful for, and so much to celebrate.

Come join us.
Posted by Reesasworld at 10:21 AM

This is the first time that I've missed your BBQ. Not a milestone that I wanted to achieve, so, I'm cyberwaving "WWWT (Wish we were there!) to everyone. Say "Hey" to the jacaranda trees that I always stare at. Can you post photos of them?