Stories have to be told or they die, and when they die, we can't remember who we are or why we're here
-Sue Monk Kidd 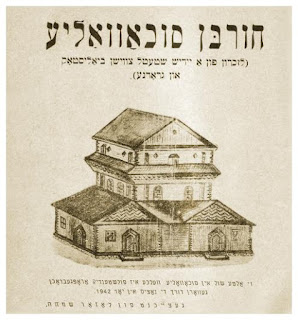 And then the father of the NLC (the F-NLC), whom LLC had found, who also wasn't lost and I knew existed, contacted me - this was not a coincidence - to tell me that he had put together a family history. Was I interested?
Indeed!!!
I never knew much about my father's side of the family except that, besides his siblings, he didn't have any.
At least, that's what I had been told.

All my life, from the time I was old enough to ask until he died, my father adamantly and continually refused to talk about his childhood. "It was hard," he would say, "Nothing good would come of it".

I have spent the last few days googling.
I google mapped where my grandparents were born, and the town where my grandfather might, or might not, have learned in Yeshiva. The names were all in Polish and Ukrainian, so it wasn't as easy as I would have liked.
I googled names, and dates, and histories of places and people and events in or adjacent to the towns and villages where my family originated.

(What did we do before Google?)

I read of places I had never heard of a week ago, of people I did not know had any relationship to me. I looked up names, I stared at faces, I virtually visited buildings, I even enjoyed virtual views.

I wanted to understand what my grandparents early life had been like.
It wasn't as hard as one would think. There are plenty of pictures, plenty of stories, plenty of historical accounts online.
The stories are all basically the same.
The Jews were invited to settle in the town by the Prince/Duke/High Priest/Whomever. Alternately treated well or persecuted, by the turn of the last century, Jews made up a majority of most of the towns and villages I googled over the past week.

The endings of the stories were also basically the same. By 1945, most of the towns and villages I googled had a Jewish population of exactly zero.
Nada.
No more.
Wiped out.
Obliterated.
Exterminated.
Murdered.

Last year, I wrote about the village Rava-Rushka, where my mother was born. The towns and villages I read about this week were roughly in the same vicinity, and shared the same history, and the same ending.

Two other events occurred over the past week that gave me pause.

The first event was the murderous shooting event (what we here in Israel would call a 'pigua', but the Americans have not yet found a word to describe the atrocity) at the Chabad Synagogue in Poway, California.

After the shooting in Poway, Rabbi Yisroel Goldstein, Rav of the Synagogue and injured in the attack, wrote an editorial in the New York Times in which he declared that just because he was targeted because he was a Jew, he would not back down. In fact, he said, it's more important now more than ever, to act even more 'Jewishly'.

"From here on in I am going to be more brazen. I am going to be even more proud about walking down the street wearing my tzitzit and kippah, acknowledging God’s presence. And I’m going to use my voice until I am hoarse to urge my fellow Jews to do Jewish. To light candles before Shabbat. To put up mezuzas on their doorposts. To do acts of kindness. And to show up in synagogue — especially this coming Shabbat."

The second event was the death of Rabbi Menahem Mendel Taub, Rebbe of Kaliv. He was 96 years old at the time of his passing. The reason I initially heard of his death was because his funeral procession caused traffic problems at the entrance to Jerusalem and my husband cancelled his planned visit to the city because of the traffic. Rav Taub's life and funeral were given wide coverage in the Israeli press, and though I had been shamefully ignorant of his existence - like I had been of my own relatives - I read many articles and learned a great deal about him after his death, much like I did of my own relatives.

A survivor of Josef Mengele's horrifying 'medical' experiments, Rav Taub dedicated his life to Holocaust Education and Jewish outreach. He was renown for reciting the 'Shma' prayer at Holocaust memorial events and encouraging others to do the same. He emphasized the spiritual resistance during the Holocaust, and the need for it today.

Today, the Jewish world is commemorating Holocaust Martyrs' and Heroes' Remembrance Day. Israel and Israelis takes the day very seriously. The Holocaust is what happens when there is no Jewish State.

The Jewish world outside Israel is rapidly disappearing. Eastern Europe and Northern Africa and the Middle-Eastern countries (outside of Israel) are pretty much Judenfrei - Jew-free.

Western Europe and the Americas have their myriad problems.

Share your stories. All of them. If you don't know the stories, ask someone who does. Don't let the stories get lost. (Hint - I'm not talking only about surviving the Holocaust.)

However, even more important than remembering the horror and the terror and the absolute evil, is to replace it.
We must replace the Jewish world that has disappeared, by - in the words of Rav Goldstein - 'doing Jewish'. Above all, however, we must replace the evil that engulfed us, is still engulfing us, with Godliness, by bringing God into our lives and into the world, as Rav Taub encouraged, even at the most difficult of times.

Share more, give more, pray more, reach out more.
And walk just a bit straighter.
Posted by Reesasworld at 1:09 PM

Reesa, beautiful article! you are so right!

and I disagree with your father. even if life in the "old country" was hard, it is the history of our families and deserves to be recorded.

my kids and I have been researching our family history for the past few years. I am going to write some suggestions here in case anyone is inspired by your article to start researching their own history.

getting started in genealogy -

for those of you who are beginners, here are some suggestions about where to start.

start with what you know. write down *everything* you know. the names of your parents and their parents. siblings of your parents and grandparents. birth dates, marriage dates, death dates, where they were born, when they came to the US (or when they moved from one place to another, if not to the US). where they lived and where they died. even if you don't have all the information, write down what you do know. e.g. even if you don't know the exact birth date, the approximate decade and/or birth order is useful. also if any of your relatives or ancestors served in the military - where and when?

talk to your oldest living relatives on each side of your family, because maybe they might know the names of ancestors for an additional generation back. talk to first and second cousins too, because they have the same ancestors as you. (maybe you will get lucky and find out that one of your cousins has already started to research it!)

also, keep a record of where you got each bit of information. (this will be important later when you need to compare conflicting records, or figure out a detail that is a composite of the parts that you got from different sources.)

with this information in hand, you can begin to navigate the various online records to get more information. e.g. - census records have *loads* of info. US immigration records include the name of the closest relative in the old country, and who they are going to in the US. etc.

some websites that require a subscription, like ancestry.com, can be accessed for free from many public libraries in the US. (i.e. the library has a subscription to it.)

there is also a Facebook group about Jewish genealogy, called "Tracing the Tribe", where the members help each other in their research.

something good will definitely come from exploring our family histories!