Is it only me?

I once wanted to become an atheist, but I gave up - they have no holidays.
- Henny Youngman

I find that, every autumn (or what passes for autumn in the Holy Land, i.e., a short period of time when it's less hot for 20 minutes a day), for six weeks, I spend an exorbitant amount of time doing household chores that I am unable to put off, as I normally would, because it's The Chagim. And when I'm not actually doing these chores, I'm thinking about doing them; Extra shopping, laundry, ironing, baking, dusting, wiping, polishing, washing, cleaning, mopping, weeding, grouting. Ok, maybe not polishing. I don't think about polishing.

When I know I have a lot to do for Chag or Shabbat - a lot of guests, extra laundry, more shopping - I start early in the week. I make lists, I plan a timetable, I prepare food to put in the freezer. That way, I tell myself, time after time after time, on Erev Shabbat or Chag, I won't have so much to do, and I won't be frazzled or anxious, and everything will be tickety boo for chag. Why is it then, that, even if I get out of bed on the morning of Erev Chag when it's still dark outside, I still find I have 20 gajillion things to do and I still get to Shabbat/Chag frazzled, anxious, exhausted, and in a snarly bad mood. (The question, of course, is am I in a snarly bad mood because I got up at 5:30 AM?)

Am I the only one that this happens to?

Am I the only one who makes about 4 cups of coffee in the space of an hour because the previous one got cold before I had a chance to drink it because I was too busy looking up new recipes on the internet that I have no intention of ever using? Why haven't I learned to just make a cold cup of coffee and save time?

Am I the only one who still has just as much laundry, even though most of the kids have left the house, as I had when they were toddlers? Do I live in a magical laundry wonderland? Does laundry breed and is only my house a good breeding ground? Is it only my dirty socks making whoopee?

Am I the only one who never learns how to calculate amounts? For example, I seldom make schnitzel. That's because it's a potchka to make, and I don't do potchkas. However, when I do prepare schnitzel, I make a lot. First, I dip the meat in flour, then in an egg mixture and then a mixture of bread crumbs and spices. I fry up four kilo of schnitzel at a time. Each time I make it, it doesn't matter how many breadcrumbs I start out with, I won't have enough for the last three pieces of meat, the last two pieces have no egg, but I have a mound of flour left over I can do nothing with. Is it only me?

Sometimes, it's not me, it's other people. I'll look up a recipe because I have a particular ingredient left over in the fridge, say, spinach leaves. I'll make a small salad of the aforesaid leaves and a couple of old tomatoes, and some basil. And everyone eats it up and fights over the last leaf.
The next week, I'll buy more spinach leaves, and make a lot of the same salad. But this time, nobody will touch it, and the leaves die a slow death in the back of the fridge, unloved and unwanted. Do other people's fridges have spurned leaves in the back wasting away? Or is it only my fridge?

Speaking of leftovers, am I the only one who cannot, CANNOT, estimate the correct size of a needed container? Either it's way too big and takes up too much room in the fridge, or it's too small and the excess spills all over the counter. Best case scenario is when the container is too small and I make some passing kid eat whatever won't fit it. Which is ok with the kid if it's schnitzel (even naked schnitzel), but not so ok it's it's leftover spinach salad. 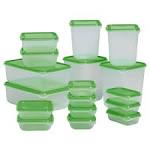 Are there other people out there playing tetris in their fridge? I can spend HOURS fitting odd-shaped containers into the fridge, only to have the bag of peppers remain on the counter. I'll start again, finally fitting in the peppers by taking them out of the bag, and arranging them individually into the odd-shaped spaces between the containers. I'm finally able to shut the door of the fridge without squishing the pie and turn around to find I've left the milk out. I make a passing kid drink it. If there's no passing kid, I just keep making cups of coffee I don't drink, and use up the milk that way.

Despite the lists that are the length of  Gone With the Wind, hours deciding what to serve at which meal, days searching for bargains, and weeks copy and pasting menus and recipes, I still forget to buy almonds, cinnamon, and beans. If I'm lucky, I forget to buy dish washing soap, too.

I really hope that I'm not, but I suspect that I am the only one who burns the rice while chopping carrots for the tzimmis, adds pepper to the chocolate cake while stirring the soup, and forgets to put yeast in the challah because is 5:30 IN THE (expletive deleted) MORNING!!

As I prepare for yet the next shopping/cleaning/cooking spree, which I accomplish in my own unique way, I wish all Am Yisrael a truly joyous, blessed, and tasty holiday.
And remember: if you don't like pepper in chocolate cake, adding the left over spinach leaves might work.

Posted by Reesasworld at 2:55 PM