Praised are You, Our God, Ruler of the universe, Who made us holy through Your commandments and commanded us to kindle the Hanukah lights.
-Blessing over the Chanuka candles

Growing up in the wilds of the Old Country, Chanuka was my favorite holiday. Freezing cold outside, toasty warm inside, we kids would watch my father light the chanukiya as close to a window sill, but still remain in the almost windowless kitchen, as he could. My parents weren't going to risk having wax drip on the wall-to-wall carpeting in the living room with the floor to ceiling windows. Ten minutes later we would be eating the latkes my mother made drowned in apple sauce. We had dreidels, and in school, we played games and sang songs and most of the regularly scheduled lessons were cancelled.

Now I live in the wilds of the Negev, and things, while mostly the same, are somewhat different. Toasty warm outside, absolutely freezing inside my house, we all gather around a slew of chanukiyot that the kids light in front of the glass door so as to publicize the miracles that occurred, and watch wax drip on the tiles of the floor, to remain there until - well - probably forever.

The kids are older now, and not all are aways at home, so lighting the chanukiyot no longer takes hours. When they are all at home, by the time the last one finishes lighting her chanukiya, the candles on the first one's chanukiya have already burnt out, leaving the youngest 'the winner' in the nightly 'see who's chanukiya lasts the longest' contest. The older ones won't let that slide, so they give her the handmade in kindergarten, wonky chanukiya made of bottle tops and pipe cleaners to light. She actually has no problem with that, except for the time the house almost burned down. But hey.

I still make latkes - only we call them levivot. And they aren't necessarily made of potatoes. There are 12 billion different recipes available today to please any palate. Livivot with apples, with cilantro and jalapeno peppers, grilled cheese livivot, and one I saw today with chocolate ice cream. (This would never have gone over in the olden days of Israel, when ice cream was completely unavailable in the winter - but I digress). And who needs apple sauce when you have orange marmalade, tahina, and smoked salmon?

The kids still play with dreidels, which we now call sivivonim. They aren't quite the same as the ones I had. First, there is the letter 'pei' on the Israeli sivivon, rather than the 'shin' on the Old Country dreidel, which, no matter how many years have passed or how many sivivonim I have stepped on in my bare feet, gives me a thrill and a flush of pride. But more than that, today's sivivonim certainly aren't made of clay, but rather wire, bullets, Hershey Kisses, marshmallows or Lego. And they don't just spin. Oh no; they draw pictures, they play music, they make shapes, they come apart and turn into storage units for even smaller sivivonim, and ultimately, they can be eaten. 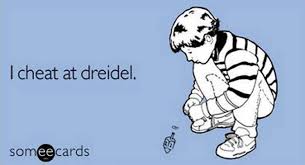 Back in the old country, sufganiyot were called 'jambusters' and were available all year, and were not particularly a Chanuka delicacy. I have only recently come to understand that jambusters were unique to my home town, and in the rest of the world, jambusters are called jelly donuts. Jambusters are far more descriptive, if you ask me. In fact, jelly donuts don't even sound that appetizing.
Sufganiyot, however, is a whole other ball game.

No longer limited to simple strawberry jelly (jam), sufganiyot come in all sizes and flavors: mint, lemon pie, olive - the sky's the limit. 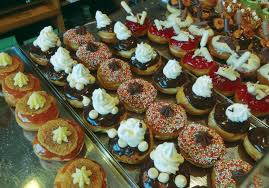 And so is the calorie count. But who's counting? 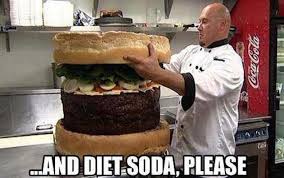 Sufganiyot, along with only one seder at Pesach, is a main reason to leave the Old Country and its jambusters behind, and make Aliyah.

Because the miracles happen here.
The sivivon I just stepped on is right.

Posted by Reesasworld at 7:26 PM No comments: Links to this post

I recently threw a cake party.
About a year ago I heard of the concept of a cake party and thought it the best idea since, well, sliced cake, but I was unable to have one at the time.

As soon as I was able, however, I sent out invitations to every woman I know, and to many many I don't know, and invited them all to my house to celebrate cake.
I received a slew of replies, and almost all of them said "what a great idea!!!" "sounds like a lot of fun!" But absolutely nobody knew what a cake party was.
The truth was that neither did I, really. So I made it up.

It was simple. Everyone had to bring a cake, and a story about cake.

About 40 people showed up.
With cake.
And stories.
Lots of cake 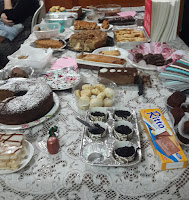 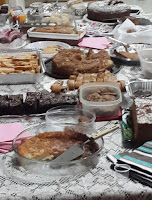 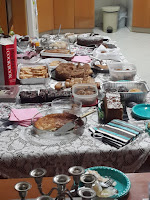 and lots of stories.

My friend S told us the story of how she discovered that her mother, a fan of the New York times and prolific letter writer to said newspaper, had her letter to the the New York Times Cook Book, with a suggestion to improve a recipe, printed. S only discovered this after her mother passed away. The sadness S felt that her mother never knew her letter had been printed resonated in her voice as she told her story, as did her pride and admiration of her mother. She brought the cake her mother had improved on. 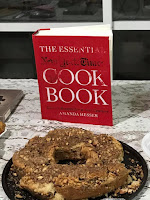 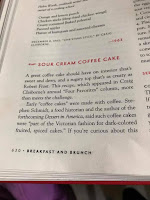 My friend M told us how her granddaughter made cake for her (M's) mother (aged 98) every year on her birthday. Since the great-grandmother's birthday was on October 31, a very special cake was prepared, each year.

My friend Y told us how her bubbe taught her to bake by using her hands and not a measuring cup. Years later, when she tried to imitate the 'yankee' way of making a cake, it failed miserably. She went back to the fistfuls of this and fistfuls of that method.

My friend R told the story of how she made a cake for her two-year old, who remembered the shape and the colors and the sprinkles months and months later - showing the inherent importance of cake.

My friend SF thought that celebrating cake was so worthwhile that she traveled an hour and a half one way to come to the party. She told us how her daughter had gone to elaborate lengths to make a cake for her grandfather while traveling overseas. All the recipient could say when he received the cake was "the cake the (nursing) home made for me had candles".

O read from a cook book written for the disabled. "Reach for the sugar. Clean the fallen sugar from the counter, shake sugar out of your hair, and measure out a cup," went the instructions. O brought a magical cake from the book, which, by itself, separated  into three layers. 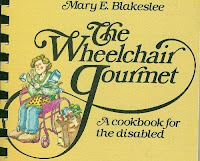 My absolute favorite story was from my friend H, who told that when her mother-in-law came for a rare visit, H felt obliged to make her a cake using her new food processor. Unfortunately, H wasn't very familiar with the different pieces of the machine, and to her dismay, the blue rubber coating on the knife was meant to be removed before making a cake. Tiny bits of blue rubber floated in the batter, which she baked and served nonetheless.
I'm still laughing.
Thankfully,  H did not bring that cake.

Other women told of recipes passed down from mothers and grandmothers; others of recipes that were not passed down and were lost and never duplicated; of special birthday cakes made yearly; of weekly rituals of having cake and coffee with the entire family at 'tea time'.

Almost all the stories centered around family. Most of the cake stories brought up sweet memories; a funny incident, a special time spent with a family member, sharing cake with family.

Seeing as it was my party, I told my story first:

I don’t remember exactly what the occasion was, probably Rosh HaShana. My mother always had a lot of family over for Rosh HaShana; she would make truckloads of food, we had enough to last us for all the rest of the chagim.

One year, she made this very fancy cake. It was, I think, yellow inside, but she decorated it with cream and cookies very precisely placed, and sprinkles and whatnot on top. It really looked gorgeous. She put it in the fridge very carefully, for dessert. To be completely honest, she probably got the idea from a women's magazine. It was a very 1970s type of cake and decoration. But, in my 11 year old opinion, it was, and remains, gorgeous.

The guests came over and they all brought something; flowers, or chocolates. One guest brought a cake, and not just any cake; but the exact same cake, decorated in the exact same manner, as my mother’s. Obviously, they had both read the same magazine.
As opposed to my mother's cake, however, this cake was a mess. The cream covered the cookies, which were all wonky anyway.

I saw the cake, and my mother saw me see the cake, and with a look, she made damn sure I said nothing. Later, I asked her what she was going to do. She answered, “What do you mean?” Without another word, she served the wonky cake, placing it in the center of the table, which, to be fair, was already laden with other goodies. My mother’s gorgeous cake was left in the fridge, and this person’s mangled work of art was put on the table in the place of honor. My mother never uttered a word.

Even as I was telling the story, I realized how apt it was that I had organized the cake party on my father's yarzheit, just a month after my mother's first yarzheit.
Growing up, there was always cake in my house , not just because my siblings and I liked to eat cake (which, believe me, we did), but ‘in case someone dropped by’ there would be what to give them. Because cake, in my parents’ house, represented hospitality, and generosity, and friendship.
Hosting 40 new and old friends with cake was a way of honoring my parents.

And my old and new friends' generosity in giving me cake was lovely too. 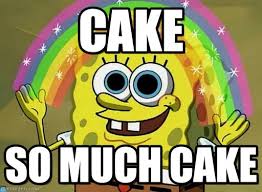 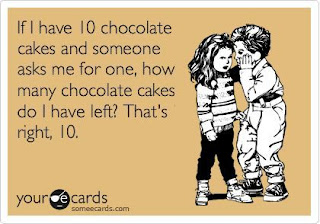 Posted by Reesasworld at 1:35 PM No comments: Links to this post