There are advantages to being elected President. The day after I was elected, I had my high school grades classified Top Secret.
Ronald Reagan

About two years ago, the Israel Ministry of Education decided to shorten the summer school vacation, and start a week earlier. This year, that decision was implemented, and approximately 2,000,000 Israeli children began their school year yesterday, August 27.

This school year, like other school years in , began with a bang. Literally. Three Kassam rockets were fired into the town of yesterday, just as the kids were making their way to school – to maximize casualties. Once again, G-d was watching, and no on was physically hurt. Just a reminder of the neighborhood we live in.  Since the beginning of the week, seven Kassams have been fired into Sderot. 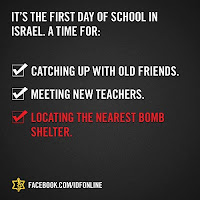 One of those 2,000,000 children was my youngest child, beginning her last year in elementary school. The night before school began, she laid out the new clothes I had bought her, made sure she had all the equipment the teacher had told her to bring on the first day, decided which clips she would wear in her hair, and went to bed early. The next night, she went to bed an hour later, couldn’t find her shoes in the morning, and ‘didn’t have time’ to copy down the homework. At this rate, she’ll be smoking a nargilla and hanging out on street corners by Chanuka.

Having only one child to wake up these days is a piece of cake. This is my first year with only one child in the system in 21 years. When my oldest first started nursery school at age 3, I still had to get the younger child (aged 8 months) ready to go out also. Then when he was in nursery, I had another younger baby or two to take with me. Now, there aren’t any babies, but it seems so much harder just to get myself dressed.

This year, I just have to drop the one kid off at school on my way to work.
There was one year, when the kids were very little, that I had to travel in three different directions to get four kids to school (two actually went to the same school). I was always late to work (ironically, I was an English teacher). I had to get up what seemed to be hours early (it was about half an hour) to prepare what seemed to be dozens of sandwiches for ‘snack time’ (it was probably only four). I don’t remember why I didn’t prepare them the night before, but I’m sure there was a reason. Today, this kid doesn’t eat anything anyway, so all I do is put some cereal in a bag, add an apple, and snack time is solved.

One year, my five kids were in five different schools in four different cities around the country (one was in college). On the first day of school I received an angry phone call from one of the schools that I hadn’t picked up my child’s books during the summer. I apologized, attempting humor to explain away my lack of organization. “My kids,” I told the teacher, “are all over the country. I don’t even know where they are, let alone their books.”

“That’s no excuse”, replied the teacher in a particularly teacherish manner, “Mothers are required to know where their children are and prepare them for school properly, no matter how difficult. That is our job.”

My problem, and I’ll deny it later so don’t bother confronting me on this, is I don’t much believe in school. I was a terrible pupil myself. There was this room in the basement of my high school that the teachers didn’t seem to be aware of, where my friend AB and I hung out most afternoons. Or, if it was too hot down there, we’d leave by the back door and go shopping. I graduated, went on to University, and became a (mostly) productive member of society, so no preaching.

Most of my friends complain about the length of the summer vacation and the amount of days the kids have off during the year, but I always loved having the kids at home. We would just laze about, not doing a great deal. I’m a great believer in lazing about. Getting the kids up and out, not to mention making sure they have their books and sandwiches, is way harder than keeping them entertained (i.e., lazing about) all summer. I’m also not a great believer in mothers running around keeping their kids occupied for two months, taking them to summer camp, the pool, the beach, movies, plays, ice skating, Austria, origami demonstrations, or dress up parties. My parents never took me to even one origami demonstration. (But we did go to mini golf, and if we had mini golf in Beer Sheva, I would take my kids.)

The point I’m making is that I actually miss those days of anarchy in the mornings and evenings, when all the kids were home. I miss the noise and the mess, and the shouting and the laughter. I miss my kids.

I’m so grateful that I still have one at home keeping me young. Even though I don’t know where her books are and I can’t help her in arithmetic or gym, I appreciate that I still have homework time with her and I love buying new erasers and sport shoes.

Of course, mostly I miss lazing about with them. I’m just glad that this last one loves lazing about even more than picking out clips for her hair.

Posted by Reesasworld at 6:11 PM 2 comments: Links to this post

Summer in starts about two days after Purim and ends about two days before Chanuka. It would start before Purim, but there is a law in this country that says it has to rain – even in a drought year – two days before Purim (when the kids dress up and party at school), and on Purim itself. So as not to bore the citizens, another law was passed that on the day between, Taanit Esther (a fast day), there be a heat wave.

Whatever, summer vacation is coming to an end. The kids go back to school in just over a week, and once again, as I have for dozens of years past, I wonder what the heck happened to the vacation? We still haven’t cleaned out the kid’s school bag from last spring (and I use the term spring in the nostalgic sense – in the old country, school used to end in the spring and start again in the fall. Here, spring is from Tuesday to Thursday sometime in April, and I’m still waiting for last fall to start). Every summer, I get disappointed that we didn’t manage, yet again, to play mini golf. Never mind that there is no mini-golf course in – that I know of. If anyone knows of a mini-golf course here, please let me know. Summer is for mini-golf.

We do usually go away for a week or so during August. Often we go north to the Kinneret and do day trips in the area. There’s a lot to see in northern , and we always find something new. This year, however, we braved the weather, and went south to the port town of .

﻿﻿﻿﻿﻿﻿﻿﻿﻿﻿﻿﻿﻿
﻿﻿﻿﻿﻿﻿﻿﻿﻿﻿ Situated on the Red Sea, Eilat is the southernmost town in Israel, and from its beaches you can see the Jordanian town of Aquaba to the east (flying what it claims is the largest flag in the world), the Sinai in Egypt to the south, and, on a very very clear day, Saudi Arabia off in the distance.
Eilat has a large port, with ships going in and out all day. There’s also a naval base, a branch of Ben-Gurion University, experimental fish ponds, birdwatching facilities (Israel is on a bird migratory path, and ornithologists come from all parts of the globe to observe migratory patterns and traits in the thousands of species of birds that arrive twice each year – they seem to know when spring and fall are), marine biology research facilities and lots of shopping. Primarily, however, Eilat is known as a tourist town. Its beaches are beautiful, the hotels luxurious, and it’s famous for its choral reefs and exotic, colorful fish. The city is also blessed with red mountains, an azure sea, beach-friendly temperatures all year round, and the bluest skies in the Land (an average of 360 sunny days a year). 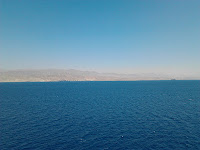 The best part of Eilat –at least for me this summer – is that, as a tourist, there’s nothing to do but relax.

Normally, when I’m on vacation, I like to go and do and see things I can’t go and do and see at home. I’m up early, I nag the others to get up early too, and I’m ready to go explore. But in Eilat, it’s too hot to go exploring. So for a week, I sat by the beach and at the hotel pool, I watched movies in the room, I drank buckets of cold water, I ate way too much, and I got a tan. 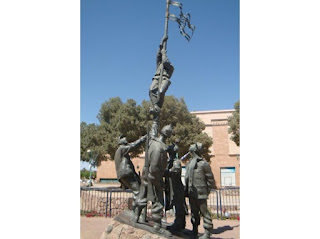 On Shabbat, there is even less to do. We went for a long walk (understand, the temperature, in the shade, was about 42° C). Outside of the tourist areas, there’s really not much to see, but I did discover something I’d never seen before; the memorial to the battle for Um Rash Rash – the Arab village that was situated near where Eilat now stands. In 1949, Israeli forces captured the Ottoman/British police station there and raised an improvised Israeli flag, made of a shirt inked with a Magen David, establishing control over the area. This battle, fought by the and Golani Brigades, was the last of the 1948-49 War of Independence. For a description and pictures of the battle, see here.  The mud brick police station, by the way, is still there, as part of the memorial.

One day, we did venture off the beach, and took a city bus to visit Eilat’s . Built in 1975 about 8 km south of the town, the observatory was the first of its kind; visitors descend about six meters below sea level on stairs enclosed in a tower-shaped structure built about 100 meters offshore, and can observe the amazing underwater life that exists. It’s like watching an ever changing aquarium.

Over the years, the site expanded and today includes 35 aquariums showcasing giant turtles, sharks, and stingrays – which can be observed from above and from below water level 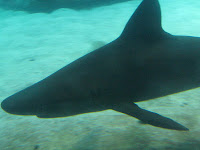 – Amazon life, and rare Red Sea fish including, but not limited to, sea horses, 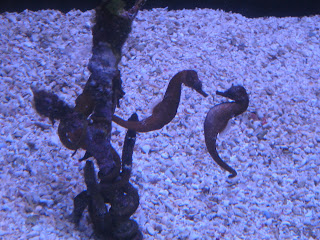 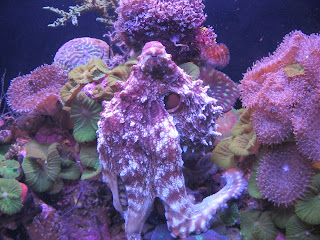 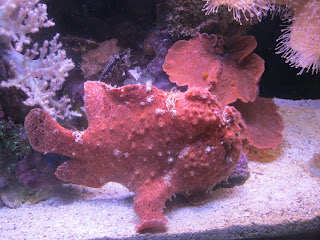 and clown fish (aka Nemo). 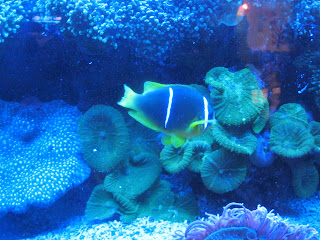 We spent several lovely, relaxed hours strolling through the above-water exhibits, acquainting ourselves with the different fish before descending below the waves. 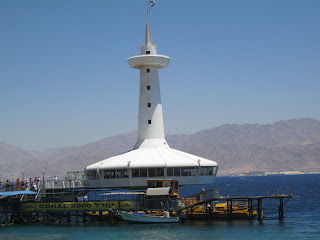 In two window-lined circular rooms (the second room was added in 1995), dozens of people, tourists, Israelis, Jews, Christians, and Muslims[1] stood staring, some openmouthed, out the windows watching the spectacular live entertainment. Fish of all sizes, shapes, and colors, swam in and out of the live choral just outside the window. Blue, green, purple, bright yellow, red, pink, striped, dotted, huge, and tiny fish darted about, seemingly in play. The amount and variety of life was simply breathtaking.

Here, I thought, is where G-d let His imagination go wild.

My imagination too, it seemed, went a bit wild. It kinda looked like a mini-golf course.
[1] There seems to be something about colorful fish that unites people
Posted by Reesasworld at 4:15 PM 1 comment: Links to this post