It will never rain roses: when we want to have more roses we must plant more trees.
George Eliot

One of the more popular national pastimes in is watching the water level in the . Commonly known as the Kinneret, this ‘sea’ is really nothing more than a small lake, with an approximate circumference of 53 km. Nonetheless, it is the largest freshwater lake – and largest source of fresh water – in . (It is also the lowest freshwater lake in the world, and the second lowest lake overall in the world—the lowest being the ).

Israelis watch the level of the lake avidly during the winter months, hoping that a large amount of rainfall will fill the lake up and ease the drought conditions that have been the norm for over a decade.

The Israeli winter of 2012-2013 has been the rainiest in years. By mid-January, about 130% of the average national rainfall had fallen.
With that, the Kinneret is at the highest level it has been in years, maybe decades. This is, however, not only because of the extra rainfall. According to ’s Water Authority, the higher level of the Kinneret is due to less pumping, which, in turn, is due to advanced conservation methods in both the industrial and domestic spheres and the increased desalination. In fact, due to conservation and desalination, the water level of the Kinneret was a full meter higher at the end of the summer of 2012 than it did was at the end of the summer of 2011.

Over the past 50 years or so, Israeli researchers have come up with amazing ways to conserve water; using brackish or grey water in agriculture, adapting plants so they need less water to thrive, and decreasing the amount of evaporation by various methods. Years ago, inventors came up with this little gismo that, when attached to a regular tap or shower head, lessens the amount of water used by something like 40% but maintains the correct water pressure. Of course, it was an Israeli company, Nitafim, that came up with a drip irrigation system way back in 1965, and which, today, is sold in more than 100 countries around the world (its slogan is Grow more with less).

For the past few years, Israel Television has sponsored ads featuring local celebrities warning/beseeching citizens to conserve water. Residents were asked not to wash their cars, not to water their gardens during the day, and take shorter showers. The tactic worked, leading to a decrease of domestic water consumption by 10% in less than a decade.

Without question, this is cause for celebration—while our water situation is far from ideal, according to authorities there is no longer an immediate danger of a water shortage.
Nonetheless, this statement seems to smack of hubris.[1]

Rain in the is a significant component in the relationship between the Jewish people and G-d. Rain is seen as a great blessing, a sign that our relationship with G-d is whole. A lack of rain signifies that something in our (collective) behaviour is lacking.

As it is written:
And it shall come to pass if you surely listen to the commandments that I command you today, to love your God and to serve Him with all your heart and all your soul, Then I will give rain to your land, the early and the late rains, that you may gather in your grain, your wine and your oil. And I will give grass in your fields for your cattle and you will eat and you will be satisfied. Beware, lest your heart be deceived and you turn and serve other gods and worship them. And the anger of the Lord will blaze against you, and He will close the heavens and there will not be rain, and the earth will not give you its fullness, and you will perish quickly from the good land that the Lord gives you.
Deuteronomy 11:13-21
(this portion of Deuteronomy is recited by observant Jews every morning and evening as  part of the ‘Shema Yisrael’ prayer.)

There is hardly a resident of Israel – religious or secular – who doesn’t revel in the rain – even when they’ve left the laundry out to dry; who doesn’t – at some point or other – stare out the window at the rain, be it a heavy mist, a drizzle, a shower, or a deluge, and smile. Even I, normally an avid rain-hater who always has laundry hanging outside, thank G-d for the blessing of rain.

Rain is a sign that, for now anyway, all is as it should be.

And after the rain comes the rainbow and all of its colors are green, to paraphrase Simon and Garfunkel (good Jewish boys).

It took me years to get used to the fact that everything is green in winter, and brown and dry in the summer – instead of the other way around like it was in the old country.

After a particularly rainy winter, such as this year, the countryside is covered in green grasses and shrubs.

Israel is awash in wild flowers. 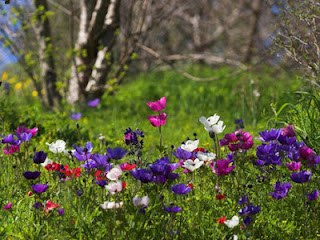 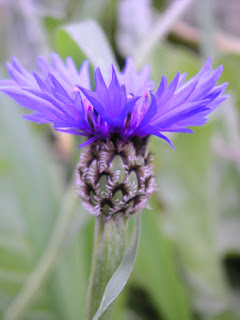 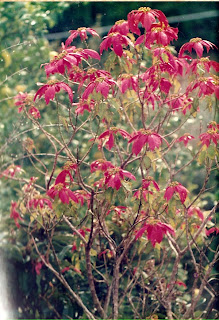 In the north, there are cyclamens (rakefet in Hebrew) 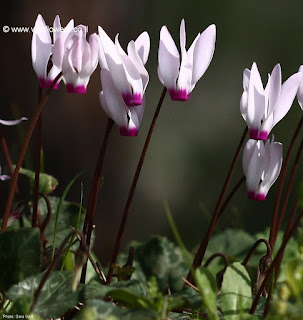 and irises – the most famous of which is the Gilboa Iris, which I was lucky enough, in my youth, not only to see, but save (that’s another story altogether). 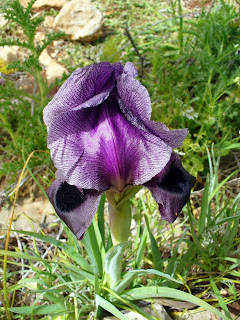 In the south we have anemones – kalaniyot in Hebrew. 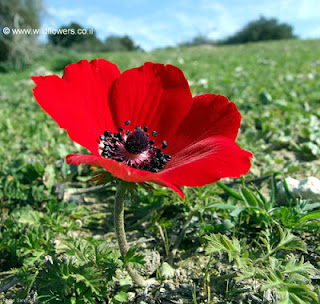 Made famous by the singer Shoshana Damari, the kalanit grows in fields all over the northern Negev. Despite the fact that these fields are only about a 25 minute drive from our house, my family has never managed the time to go and visit them.  But since this year was particularly rainy, and the fields were reported to be particularly beautiful, we made an great effort and went with friends on Purim – very late in the season – to track them down. 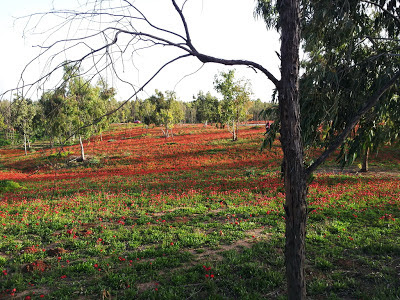 It was as if G-d himself had rolled out a red carpet. 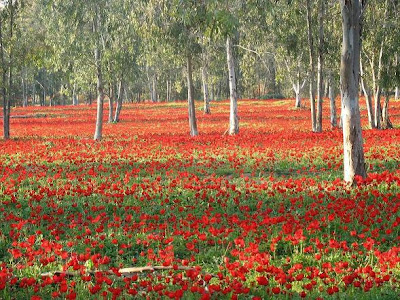 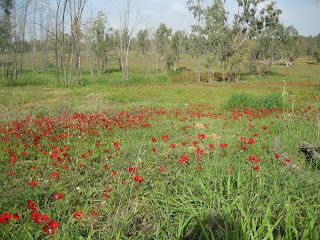 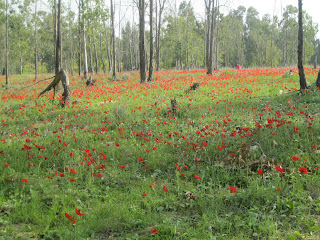 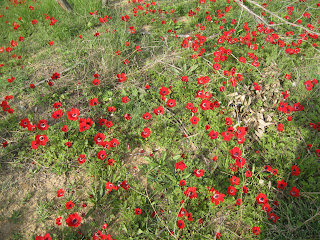 Maybe the water crisis is over in Israel – due to our G-d-given industry and brains – but rain is needed now, as ever, in the Holy Land.

No amount of desalination, or recycling water, or not washing cars, or gizmos in your sink is ever going to produce this blessing. 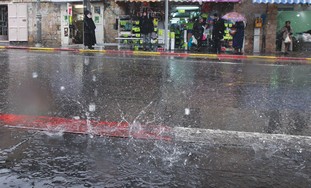 [1] From ancient Greek, hubris (according to Wikepedia) means “extreme pride or arrogance. Hubris often indicates a loss of contact with reality and an overestimation of one's own competence or capabilities, especially when the person exhibiting it is in a position of power.” In Greek literature, the gods punish those who show hubris
Posted by Reesasworld at 4:11 PM No comments: Links to this post